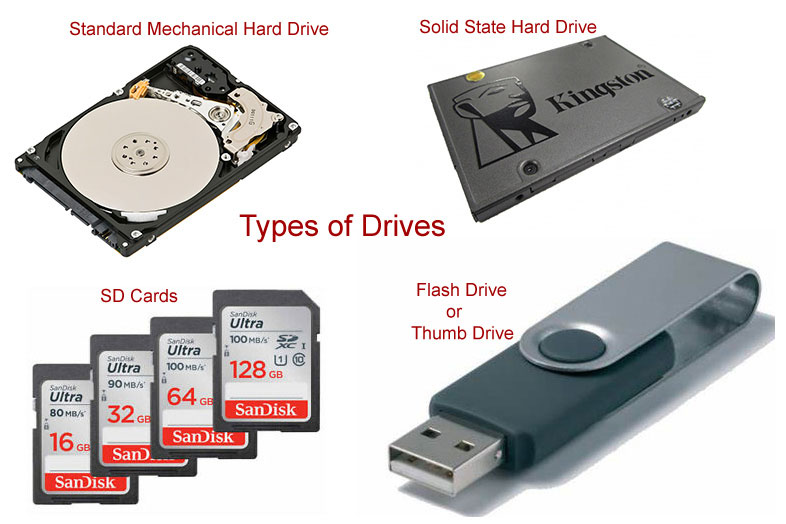 “Computer Drives Flash Drives and And Cloud Storage Explained” is extremely helpful for beginner and intermediate computer users. The majority of my computer repair customers have a general understanding of a computer hard drive. Surprisingly, they seem to struggle with understanding data storage in general. Most of the time when I suggest to a customer a flash drive, an external hard drive, or cloud storage, is what will work best for them, they don’t always understand what I’m talking about.

I am going to explain the differences between the various “Data Storage “DRIVES” and what applications they work best for.

How To Identify What Is a "Drive"

No matter what type of storage it is, if it’s hardware, then it is a “Drive”. In Windows 10 you go to “This PC” and that’s where you will find what drives are connected to that computer. You will see the “C” drive which is the computer hard drive, and maybe the D: DVD Drive. If it’s designed for data storage then it’s a drive. All drives will be visible in “This PC” in Windows 10. It doesn’t matter if it is a flash drive, SD card, hard drive, or USB external hard drive. All drives that are connected to a computer are visible in the same place in Windows 10.

How To Easily Access A Flash Drive, Hard Drive, and SD Card

Go To “THIS PC” and you can see any “Drives” connected to your PC. Double Click on the drive you want to access. 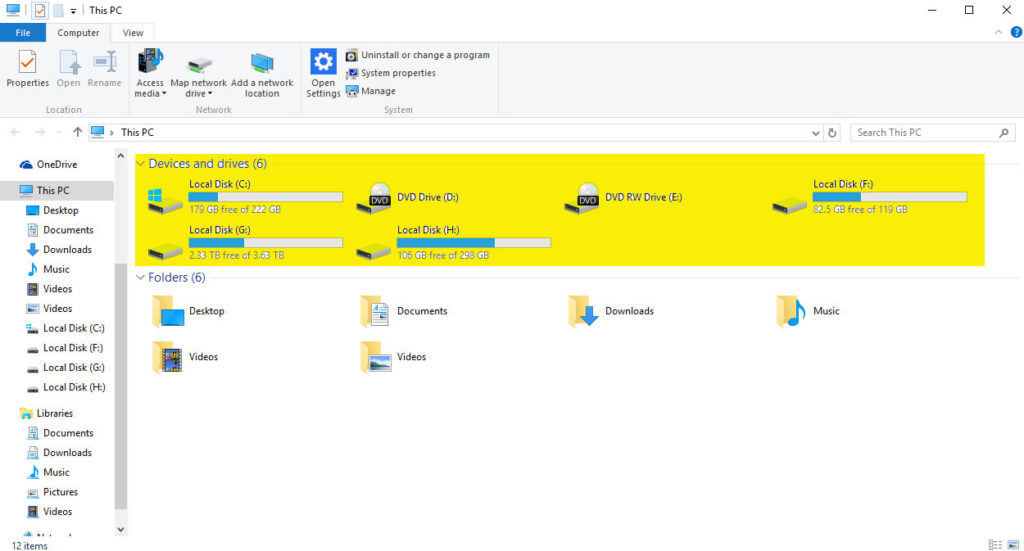 Hard Drives, Flash Drives, SD Cards, are all designed to store data. The Cloud is not a physical drive that you can touch, see or feel, but it is still has a hard drive involved. Cloud storage is using computer hardware somewhere in a remote location. The cloud is when you are storing data in a remote location instead of your computer. The data is stored on a “physical server” versus in your local “C” drive on your computer.

It’s best to perceive all hard drives as temporary storage compared to the cloud. The reason is simple, all hard drives and computers will fail at some point. The cloud is not only continuously backed up, but it’s backed up in multiple locations. So it is impossible for the failure of a drive and or equipment to jeopardize losing your files.

A hard drive is the equivalent of a physical storage warehouse with the exception that it’s storing data versus an actual product. Hard drives are designed to last for many years and can be tested and measured for longevity. Easy to use software like (Hard Disk Sentinel) can test the health and performance as well as measure days and hours of usage all in seconds.

There are two different types of hard drives, the first is a “mechanical” and the second is “Solid State”. A mechanical hard drive is using a “Disk” internally that is similar looking to a CD but much smaller. This disk runs at a very high rate of speed in a sealed airtight casing. The key is that it has moving parts so they wear out over time, and or can fail at any time, like anything else that is “mechanical”. 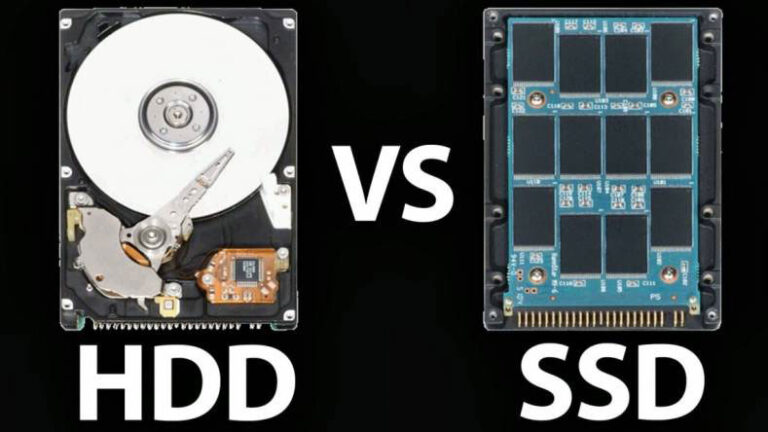 An SSD (solid-state drive) has no moving parts, SSD storage has a series of “Chips” versus a “disk” inside a mechanical drive. Compared to a mechanical hard drive an SSD is much faster and seamless which results in no “buffering. Buffering is when you see a wheel spinning on the screen because your hard drive is working. You will rarely experience buffering with an SSD.

Solid-state hard drives are far superior to mechanical hard drives because they are noticeably faster, but they cost more. In 2020 I noticed the SSD’s dropping in price, which would suggest that mechanical drives are rapidly being phased out.

All hard drives will fail at some point! So when using a computer hard drive, an external hard drive, an SD card, or a flash drive to store all of your important documents, pictures, music, and videos, it’s imperative to have them in two separate locations. In other words, backed-Up. There is no excuse not to have backups for what you can’t afford to lose because a flash drive is inexpensive.

The most important thing to keep in top of mind awareness is all hard drives will fail at some point.

How a Flash Drive Also Known As a Thumb Drive Works 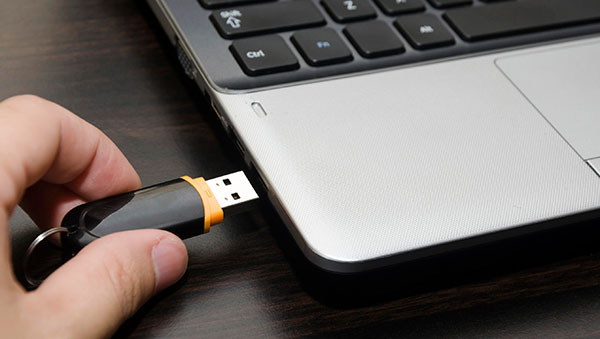 A “Flash Drive” and a “Thumb Drive” are the same thing and come in various sizes for the amount of data storage they can hold. They are basically the same as an SSD in the sense there are no moving parts, just a storage chip inside. As you can see in the above image they plug into a USB Port.

The primary purpose of a flash drive is to move data from one computer or device to another, so long as it has a USB input on that device to input the flash drive. 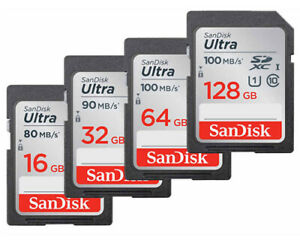 An SD card also is known as “Flash Storage,” is the small storage card that’s inside cell phones and “Chrome Books” and operates the same as a “Flash Drive.” The difference between the two is an “SD Card requires a special slot for that specific device, whereas a “Flash Drive” plugs into any device with a USB input.

As a professional technician, I highly recommend staying away from devices like Chrome Books designed to look like a computer but have an SD Card as their primary storage drive. SD Cards can not install most Windows Programs because it’s not a Windows operating system. The limitations of a Chrome Book can be extremely frustrating.

Chromebooks are designed to be used with the cloud for storage and can be a great companion for very specific online work. The idea is to use the cloud for your storage which is the safest and most secure method. The problem is far too many consumers do not understand all this and will get extremely frustrated with a Chromebook.

SD Cards were originally designed and work best for Smart Phones and Cameras. They are an excellent upgrade for increasing your Smart Phone storage, you can never have too much storage.

Video requires a large amount of storage and SD cards come in large storage capacity for this reason. Transfer rate speeds are important as well because the faster the rate the less waiting.

A 512GB can hold a full day of 4K video and that’s why SD Cards come in large Storage capacity. So you can upgrade the size of your SD Card in your phone, camera, and Chromebook. 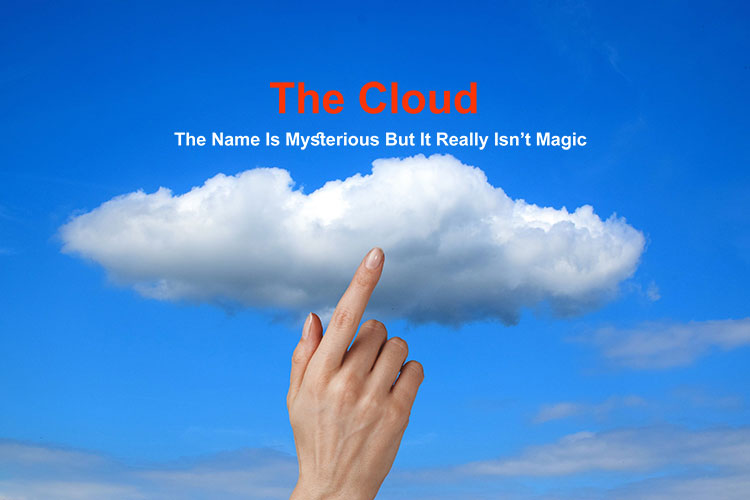 The Cloud is actually a very basic concept that is the future in present in 2020. I can’t think of any other way to signify the importance of the cloud and its significance in the roadmap of the direction computing is going.

The cloud is more of a reference than an actual thing. All the cloud is a place to store data other than storing it on the device you’re using. So if I am storing some pictures, documents, video, music on the cloud, I simply refer to the fact that it’s not stored on my device. It’s still on a computer somewhere, such as but certainly not limited to Google Drive, One Drive (Microsoft), Dropbox, and many more. I use Google Drive because they give everybody 15GB of Free Cloud Storage. If you have a Gmail account you have a 15GB Free Cloud storage account using the exact same credentials as your email login.

Why Do I Use The Cloud?

I use cloud storage for one primary reason, It’s impossible for me to lose my most important data. I use it for those treasured pictures and documents because I know all my devices will fail at some point, and that’s coming from a professional computer technician with 25 years of experience!

Why do I use Google Drive for my personal files? It’s because they have the money to protect my personal files and guarantees I will never lose them. There isn’t anything that Google values more than security, and they can afford the best security in the world!

I also use the cloud for websites and business purposes, but I purchase that storage from Get More Hosting because I control it. I’ll get back to this later in the article.

Cloud storage security is why if you don’t know your password for your email you are subject to a tortures process getting into your own email account. This happens because Google is being trusted with the most important digital files we own on its cloud servers. Although I am using Google as an example, you can trust that these cloud service providers are all doing the same thing.

How Can I Be Sure Using The Cloud Will Prevent Losing My Data?

Cloud storage is the only way to guarantee not losing data because it’s backed up daily at a different location from the servers your data is stored on. The Cloud storage system is all run on servers using the highest level of encryption that exists. I am speaking of large companies with these cloud servers already in place and ready to go, not some fly-by-nighter in their garage. I personally think it’s important to have 24/7 phone customer support available, and that’s why I use Get More Hosting.

How To Protect Your Data

The most important thing to be aware of is your devices sharing data and devices capturing data. If you want genuine safety and security then I highly recommend accessing your account on one main device and set that operating system to not share with other devices.

Apple will put all your data on other devices and you’ll be looking at pictures on your phone and you didn’t know it’s syncing everything in the cloud folder. Synced devices can catch people up in a situation they’re not prepared for because something could suddenly appear on a spouses phone or anybody on your network.

When you connect to wifi in Windows 10 it asks if you would like to “Sync with other device on your network” and if you say yes you could  compromise your Cloud Credentials and or contents in your cloud folder. The bottom line is do not sync to a network if you don’t want anybody mistakenly seeing items in your cloud folder.

I do not sync my devices, for one reason, because I don’t want any surprises. I can lose my phone anywhere at any time but not so with my desktop computer. The likelihood of my phone ending up in unscrupulous hands is a hundred times greater than my desktop falling into the wrong hands.

You have two choices it’s either sync or don’t sync across devices. This has caused many people personal heartaches because they didn’t have a keen understanding of what sinking really is. My recommendation is to avoid syncing Personal email accounts and devices. On the other hand, many businesses benefit greatly from syncing across devices. good idea for a business but it can be a bad idea with personal devices and email accounts.

The Cloud Is Awesome, and It's Here To Stay!

The bottom line is the cloud is awesome because I can’t lose the information that I can’t afford to lose. We all have a huge personal responsibility when it comes to protecting our data. It’s imperative to use passwords that you don’t share with anyone.

We will adjust to using the cloud the same way we adjusted to using a computer; it just takes time.

The sooner you use the cloud, the sooner you’ll get comfortable with it. If you don’t make an effort to use the cloud routinely, you will fall behind the people that do use it. Anybody that embraces technology has an advantage over those who don’t.